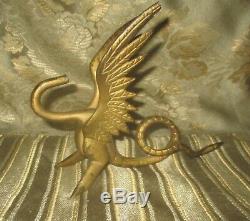 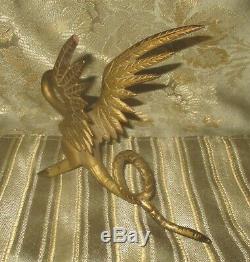 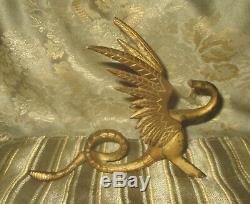 I love this piece-- being a sucker for every Victorian gewgaw that comes my way. It's been here for ages in my personal curio cabinet, along with petrified wood and coal from the Titanic. From the day it came in with a box of goodies from Mr. B I'd set it aside because of its age and energy. Only recently when moving the cabinet and having to empty it first did I set it on the table to look it up in Bob's notes.

Turns out its a rather treasure as bizarre as it looks, and pretty much being wasted just sitting in a cabinet on display. We are convinced someone will recognize its potential and will put it to proper use. So what do we have here?

A broken piece of decorative Victorian brass in the fantasized shape of a dragon? Thats pretty much all most mundane people will see, immediately followed by the thought, who keeps this stuff? Or whats it worth in scrap metal? Measuring 7 log and approximately 5 high, believed to be brass by its weight but possibly pot metal painted brass or gold, or even brass once gilded. It is sturdy, solid and well balanced.

Without a head its hard to tell if it was meant as a support for a bowl or other decorative item, but the loop of its tail may have another purpose entirely. We feel safe in saying it was meant for a desk, as a possible pen rest or other accessory common to private studies and libraries, usually part of a gentlemans domestic or business clutter. Ahbut wouldnt it make a clever support for a small crystal ball? The break in its neck is clean, no bends or rough edges.

Its left wing is missing a feather tip. Now we get to Mr. Bobs notes, and can disregard its original purpose for something much more exciting. The headless dragon comes from the late Professor -----, from the estate you already know about. Kept on a separate shelf, not table display, surrounded by occult books.

Our sensitive says the head was removed to keep its energy controlled, to remove chaos from an untamed creature and make for a more angelic force. There is a connection with John Dees work.

This is an object of distinct and unique energy, a portal for unseen forces called on for mystical purpose. The mention of John Dee is significant if you know the name and history. B believes it was used early on 19. Century by a gentleman member of a secret society, again according to info. Given him by his sensitive. The dragon's traditionally fearsome status was replaced (once the head was removed) with an angel essence, but as we know angels are beings of both light and darkness. Thats all were going to say about this. Having it around in closer proximity than a display cabinet in another room has been invigorating.

I personally wouldnt know how to summon its energy specifically and maybe I dont need to. Consider it all a part of your own personal connection and exploration, should you be inclined to the challenge. Rememberangels come from all ends of the spectrum, if the connection to John Dees work is reliable and the principle source.

As usual, we request you the study the photos and use your own best judgment. Im certain it will not speak to or impress everyone, but there is someone out there this is meant for. Please feel free to ask any questions you may have and thank you for visiting! The item "Victorian Antique'Headless' Dragon, Angel Portal, John Dee, from Haunted Estate" is in sale since Wednesday, April 10, 2019.